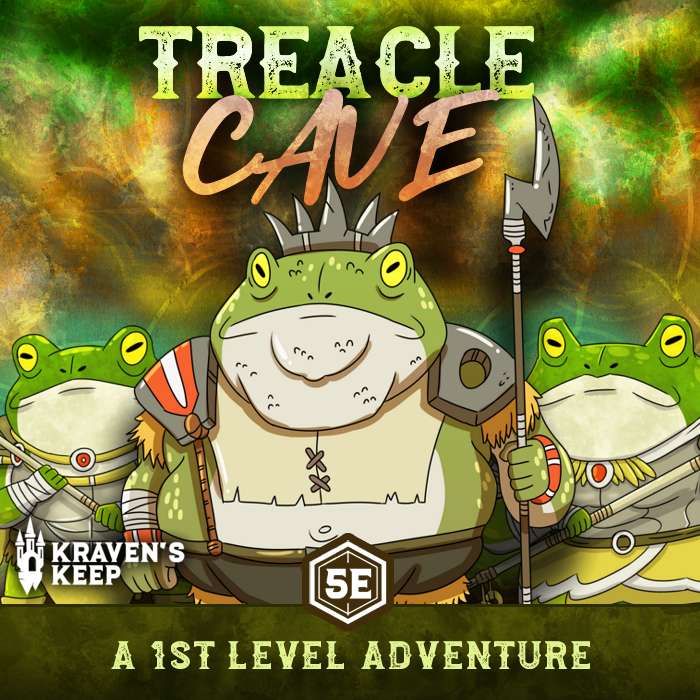 Treacle Cave is a Fifth Edition adventure designed and optimized for four players of 1st level. This adventure works well set close to a small country village or on the outskirts of an urban metropolis.

For many years Treacle Cave and the swamp that surrounds it have been avoided. Locals whisper of foul green creatures that kidnap wandering citizens in the night. Unlucky for the Rancor family, night fell on their journey home quicker than they realized. As the moon began to rise so did the nerves of Frieda and Anton along with their young daughter Daisy. Suddenly, an ambush was sprung. Two green creatures leaped out of the swamp and began to attack the family's humble wagon. Anton fought bravely but was subdued after which he and Daisy were snatched up. This left Frieda unconscious and alone in the wake of the destruction. Once she awoke Frieda panicked and began to weep. Is there anyone out there who can help rescue her beloved family?

Install this Add-On via the dropdown menu in the Game Addons section of the Game Details Page. Select Treacle Cave below and click on the blue Add to Game button beside the drop down menu.
For more adventures from Kraven’s Keep head over to our Roll20 Marketplace