The Tomb of Evelyn Crimson VTT 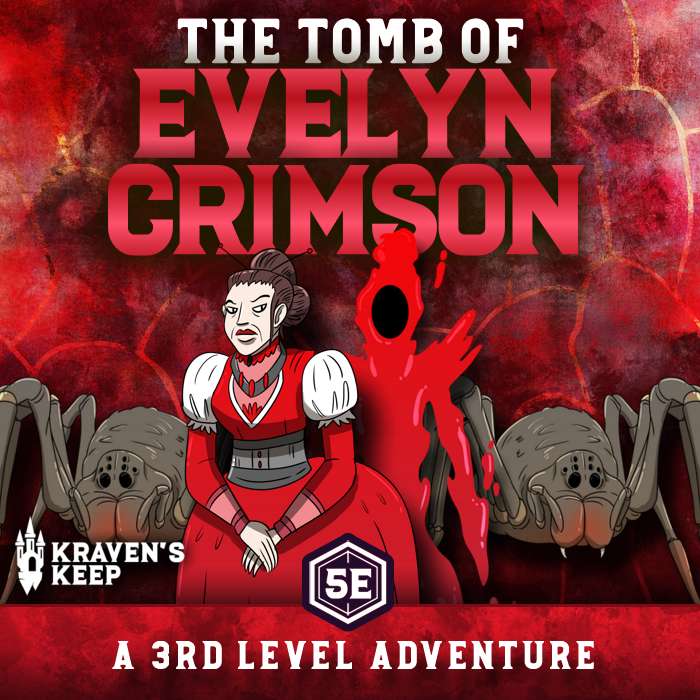 The Tomb of Evelyn Crimson is a Fifth Edition adventure designed and optimized for four players of 3rd level. This adventure works well set in a small country village or larger metropolis area.

Evelyn Crimson was a vile and cruel woman but most people never knew the depth of her cruelty. She gained her wealth through blackmail, slavery, and murder. Over her life, Evelyn had many husbands each meeting the same mysterious fate, after which all their riches were seized by Evelyn. Due to Evelyn's power and reach in the land, no one dared look into the circumstances which took these unfortunate men. One of her husbands: Adam Deruta was a wealthy merchant trader and after an idyllic romance, he and Evelyn bore a daughter they named Diana. By Diana’s third birthday Adam had discovered Evelyn's true nature and quickly formed a plan to send his only daughter away to live a life far from her mother. It was not long after this that Adam soon met the same fate as Evelyn's other suitors and disappeared without a trace.

Install this Add-On via the dropdown menu in the Game Addons section of the Game Details Page. Select The Tomb of Evelynn Crimson below and click on the blue Add to Game button beside the drop down menu.
For more adventures from Kraven’s Keep head over to our Roll20 Marketplace