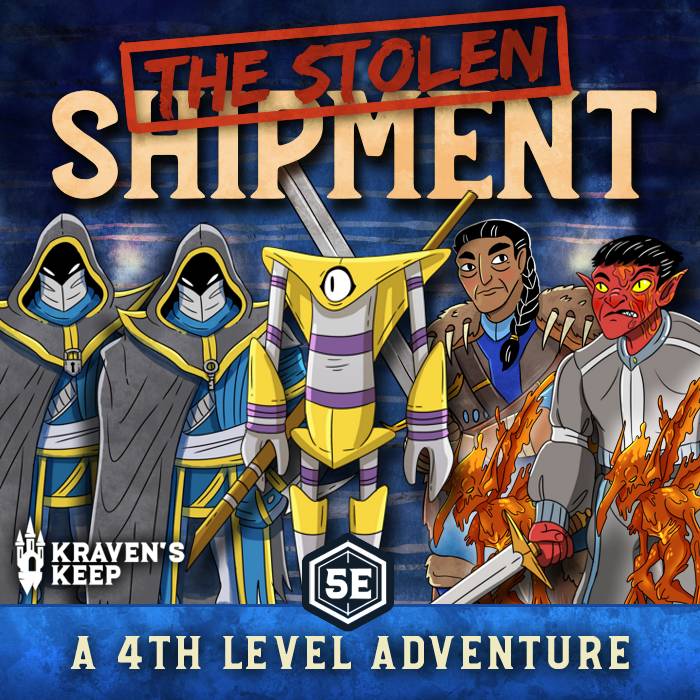 The Stolen Shipment is a Fifth Edition adventure designed and optimized for four players of 4th level. This adventure works well set in a town or city.

Archmage Taran Voltac has grown his power over the ages by always seeking new magical practices and arcane implements. Taran commissioned a special golem he hoped to employ as a personal guard and assassin. His goal was to someday create a whole platoon of these constructs. The alchemist Taran commissioned to make the first golem discovered a relatively safe way to manipulate aberrant magical energy. With this power harnessed the alchemist could create a powerful construct with both arcane and martial prowess. After the alchemist’s completion of the golem, he shipped it via armored transport to the mage’s estate in the city of Goldenmarch. Somehow a smuggling ring known as the Black Circle found out about the delivery and was able to get the drop on the guards hired to transport it. The Black Circle secured the shipment for themselves and disappeared into the sewers. Currently, many parties in the city, thieves and rulers alike, are seeking to get their hands on this stolen shipment!

Install this Add-On via the dropdown menu in the Game Addons section of the Game Details Page. Select The Stolen Shipment below and click on the blue Add to Game button beside the drop down menu.
For more adventures from Kraven’s Keep head over to our Roll20 Marketplace