Rumble at the Wounded Stag VTT 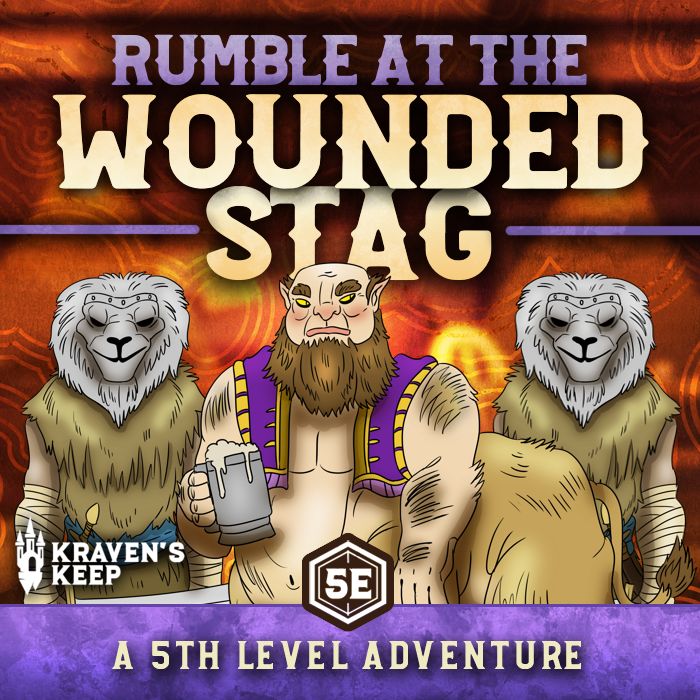 Rumble at the Wounded Stag is a Fifth Edition adventure designed and optimized for four players of 5th level. This adventure works well set in a city or small town.

Nearly a decade ago, Dreddle Slickstone was a bard traveling with an adventuring group. On their travels, they came across a forgotten temple in the woods and began to explore its many rooms. Wandering off on his own, Dreddle found a great hidden chamber filled with gems, gold and treasures which he helped himself to, not realizing there was a large angry lamia near. The lamia threatened to kill Dreddle, but before he could Dreddle offered the monster a trade in desperation. Dreddle offered up the lives of his party members and their treasures in exchange for his life. The lamia accepted the deal. So Dreddle lured his companions into a fight with the lamia where he aided the beast to a bloody victory. After that day Dreddle has continued to please his new master. Presently, a plan was hatched to capture wealthy citizens, bring them to their base in the woods, magically compel them to hand over some of their money, and send them on their way unharmed. This plan has been quite successful, they have secured quite a bit of money from some very rich people. So much money the operation has expanded beyond the pair of them. Thugs from nearby towns have been hired into their gang which became known as the Brazen Lions. Will Dreddle and his boss, Stout the Lamia, be able to keep up their scheme or will another party come in and strike it down?