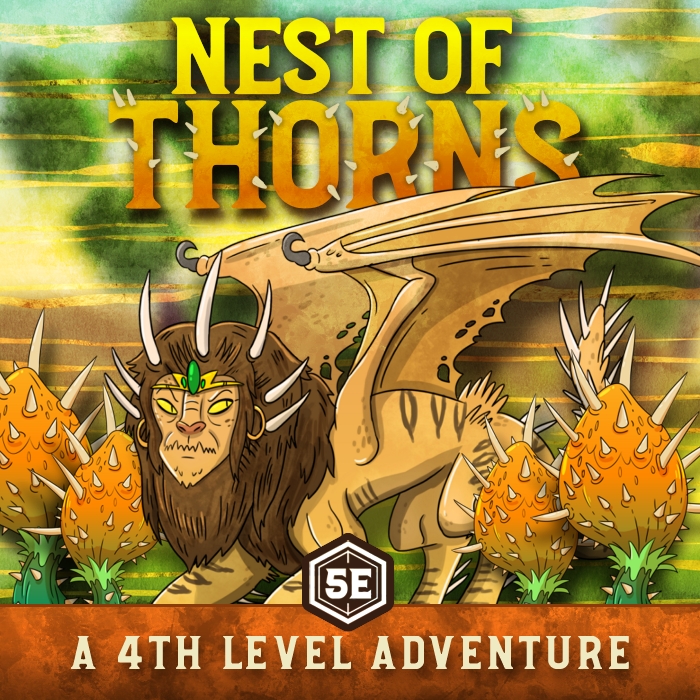 Nest of Thorns is a Fifth Edition adventure designed and optimized for four players of 4th level. This adventure works well set close to a small country village or on the outskirts of an urban metropolis.

Long ago there was a congregation of monks, who through their devotion to the goddess Morlannah, were blessed with a sacred item that became known as the Cup of Favor. This item became sought for the goddess's blessing as it allowed those who drank from it to bend their fate.
As word spread of the cup and its abilities, these rumors attracted the attention of a greedy blue dragon who wished its blessing for herself. A battle ensued between cultists of the dragon and the monks of the temple. The cultists were driven back but not without a great loss of life. Because of this, the monks decided the cup was too dangerous to keep so they abandoned the treasure and their shrine, in hopes that greed would no longer bring violence upon their ranks. So the Cup of Favor lay hidden among the ruins of the temple.
Eight years ago, after decades of squatters and explorers venturing into the ruins, a mating pair of manticores took up residence within the ancient temple complex and eventually discovered the lost artifact. Lady Estelle, the female manticore, claimed the Cup of Favor and began using it to acquire new treasures. She and her mate Kalesh, currently enjoy luring adventurers to their newfound lair and toying with them at games of wit and chance, slaying those who dare try and best them.

Install this Add-On via the dropdown menu in the Game Addons section of the Game Details Page. Select Nest of Thorns below and click on the blue Add to Game button beside the drop down menu.
For more adventures from Kraven’s Keep head over to our Roll20 Marketplace