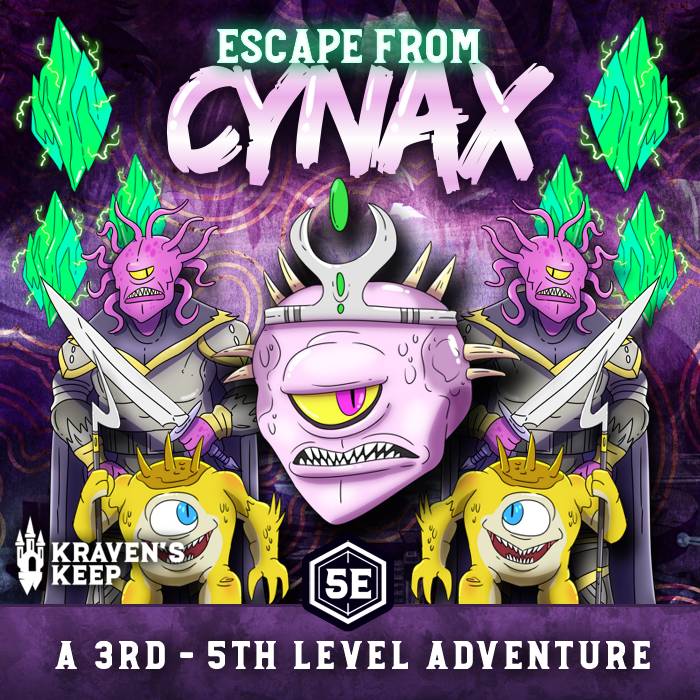 Escape from Cynax is a Fifth Edition adventure designed and optimized for four players of 3rd level. This adventure designed to be set in a science fiction high fantasy world, such as the Spelljammer setting. It will take new characters from a starting level of 3 all the way to level 5.

On the distant planet of Cynax, harsh winds batter vast plains of dirt and dust. While overlooked by most, long ago, a perceptive being found a great treasure beneath the dirt of Cynax. Flux crystals: green gemstones which hold within them raw arcane potential. Cynax has been plagued with bloody coup after coup as beings continually invaded to control this precious resource. One of these creatures is known as Lord Zalakor. Lord Zalakor is a floating one-eyed creature with powerful aberrant magic. Zalakor easily slew its predecessor and took command of its crystal mine and the wealth held within. To keep a steady supply of flux crystals moving, Zalakor sends out its minions to distant planets and lands through an arcane gateway in its palace. Zalakor’s minions are an aberrant humanoid race known as the occlinox and are loyal to their lord, obediently capturing slaves to work tirelessly in the crystal mines. This operation has been growing greatly under the current leadership of Zalakor, but perhaps this reign and endless exploitation of other beings is coming to an end…