Den of the Werespiders VTT 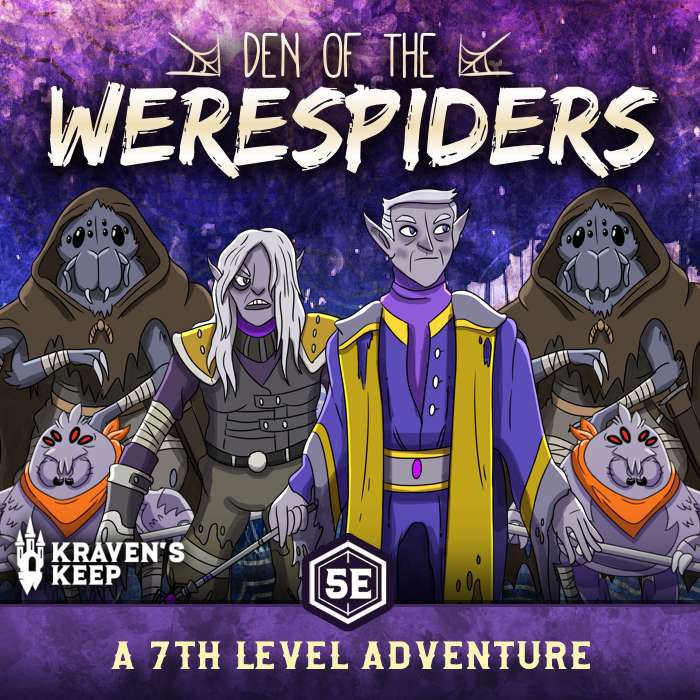 Den of the Werespiders is a Fifth Edition adventure designed and optimized for four players of 7th level. This adventure works well set in a secluded forest that people usually avoid. It also works well to introduce a new PC or if a few players are absent for a session.

No one ventures into the Lost Wood. As its name suggests, those who do venture into this cursed forest are rarely seen again. Many dark and twisted creatures dwell here. So do beings who wish to live outside the gaze of greater society. Nadeen and Qwendynn Chiss are two such souls. Drow partners and outcasts from their city, Nadeen and Qwendynn were both revered members of their society. Nadeen was once an ascending acolyte to the high priestess of the Queen of Spiders until a potent strain of lycanthropy infected her. This curse changed her into a dreaded werespider. Once word got out of her condition she was forced out by her kin, the curse believed to be a divine judgment from their demonic goddess. Qwendynn, who had only known the scorn and scrutiny of his society, was more than willing to join his wife in her exile. Others like Nadeen, cursed with new terrifying forms, were found lingering in the Lost Wood. As years marched on, other wretches and vile beings slowly joined this growing band. A cult began amassing and soon started capturing lonely travelers to be devoured by their members...