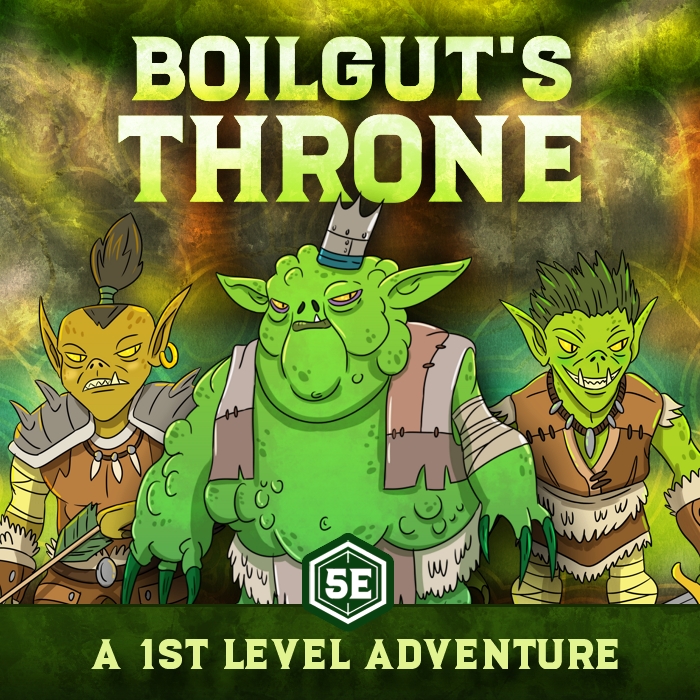 Boilgut’s Throne is a Fifth Edition adventure designed and optimized for four players of 1st level. This adventure works well set in remote rural areas near a lake or close to a small country village.

A number of years ago a druid adventurer was attacked by a small troop of goblins in the woods. In his dying breath, the druid inflicted a curse on the goblin who ended his life. After a few days, the curse began to show itself: large goiter-like boils began to grow all over his body and thick mucus-like bile pooled in his throat. The goblin, now estranged from his tribe, suffered alone as the curse warped his form into that of a bloated and grotesque creature.
After some time this goblin came upon another tribe of goblins. These new goblins attacked him upon seeing his horrifying form. The cursed goblin suddenly vomited acidic bile on one of his attackers, killing it instantly. The other creatures stopped their assault and revered the cursed one as being blessed with a divine gift from their god.
They deemed the cursed one: Boilgut, and he became their leader and king. The new tribe's presence now threatens the lives of a local village, can the party stop the evil goblin king?

Install this Add-On via the dropdown menu in the Game Addons section of the Game Details Page. Select Boilgut’s Throne below and click on the blue Add to Game button beside the drop-down menu.