There are many unique and fantastic characters and deities that live in the worlds of Dungeons and Dragons. Here I am sharing my take on the many iconic beings of the Forgotten Realms and beyond. Prints of my art can be found at my store by following the links below the entries - Colton Balske 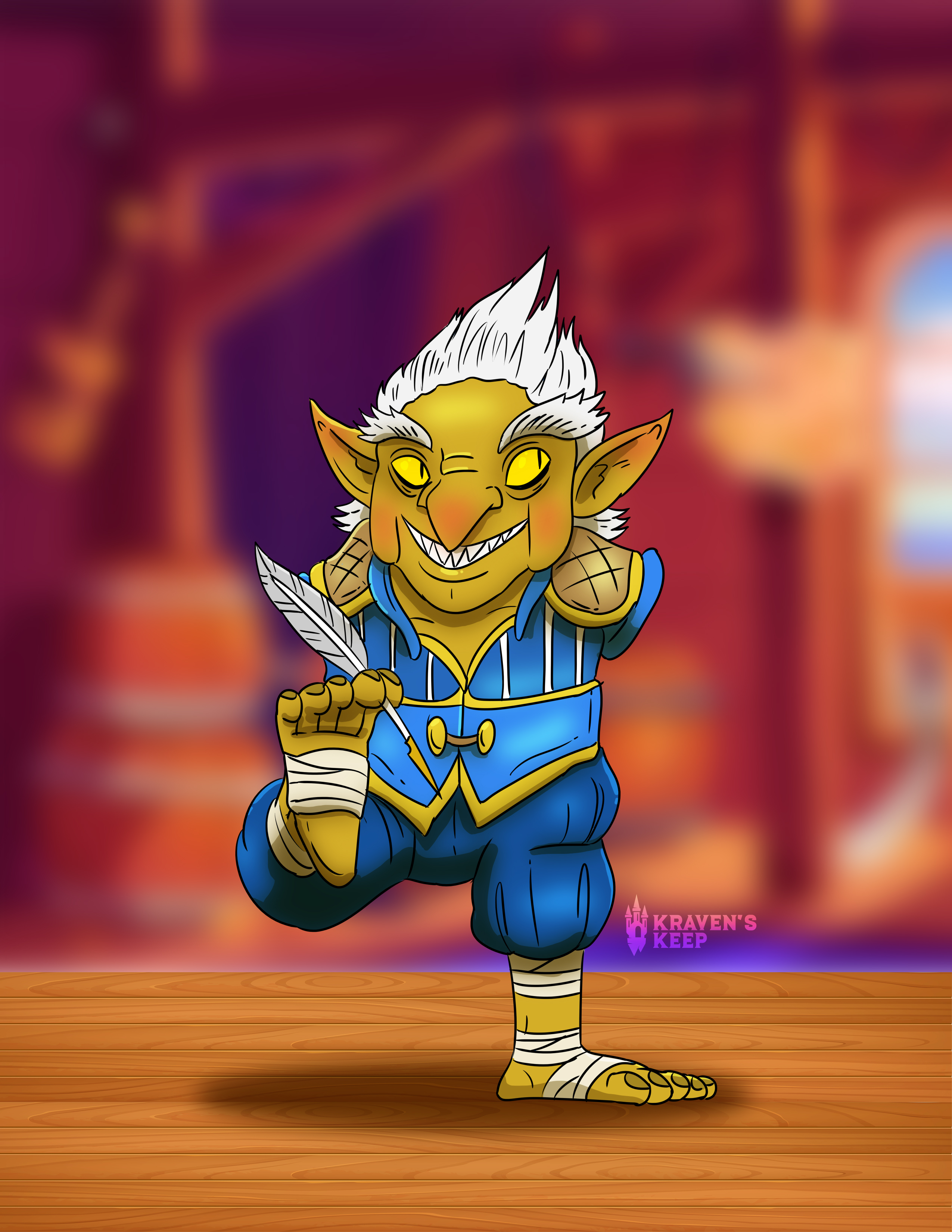 ZORTH
This elderly goblin has two missing arms, both taken while engaging in the dangerous trade of Moorbounder breeding. He is adept in the rearing and riding of the panther-like creatures of Xhorhas. Zorth is an NPC from Critical Roles second campaign. 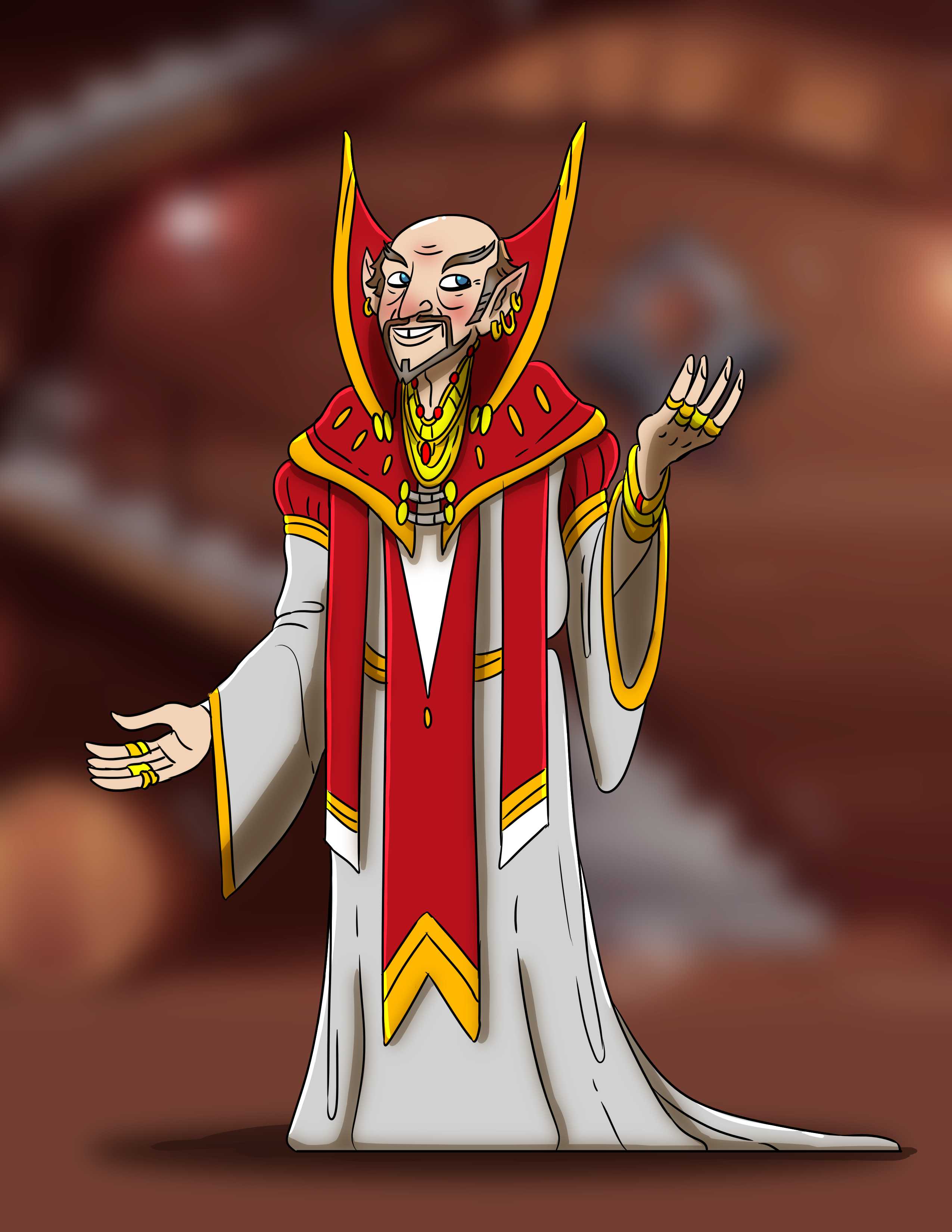 EVON HYTROGA
Evon is the half-elven curator of the Twilight Mirror museum in the town of Heartmoor Hamlet. Evon has made many claims about his adventurous past and the treasures he holds in his establishment, but the credibility of these claims is somewhat suspect. Evon is an NPC from Critical Role’s third campaign. 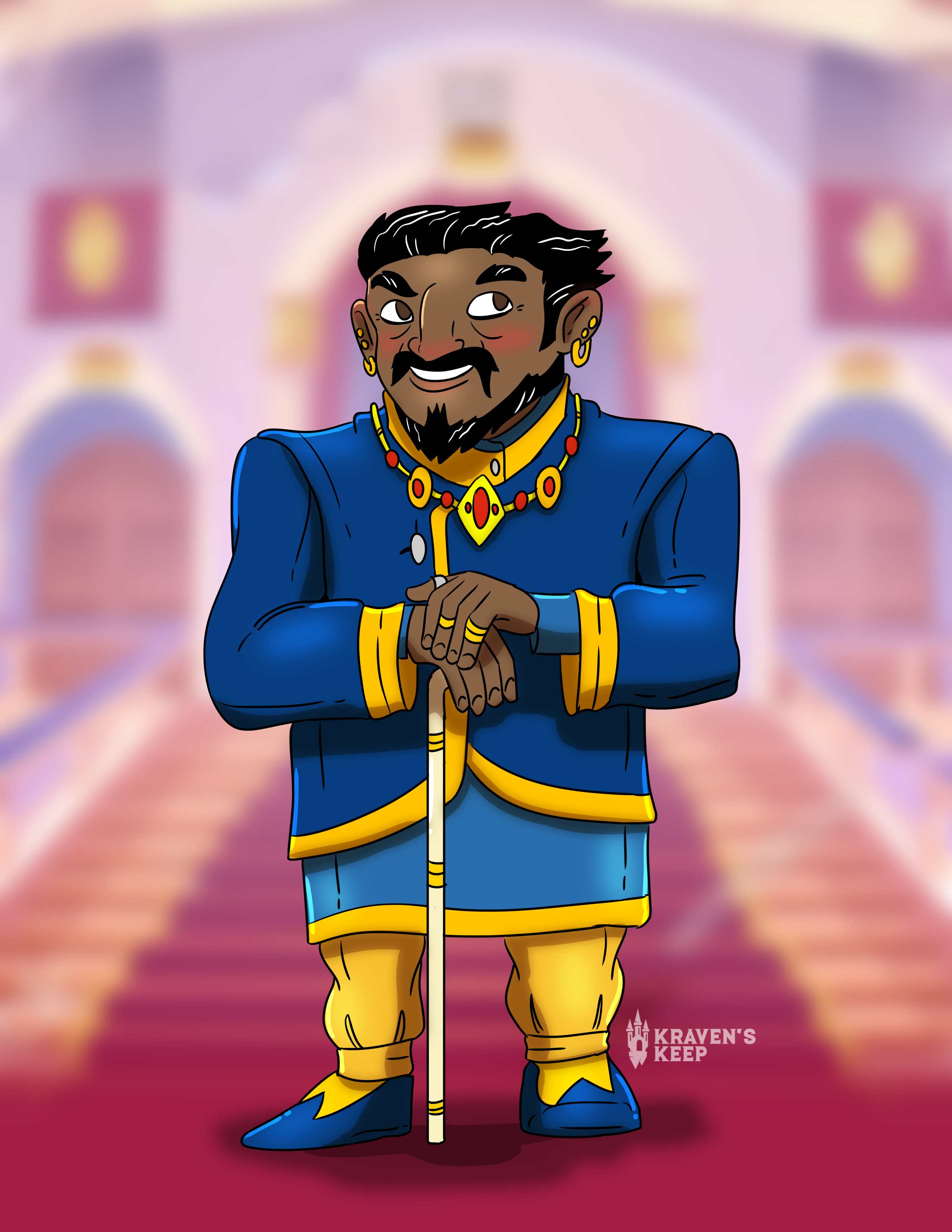 ARMAND TRESHI
Armand is the dwarf leader of the Mahann House in the city of Jrusar. He seeks to grow his political power and influence by sponsoring the mercenary group Paragons Call. Armand has also been funding research to weaponize lycanthropy with the help of a fiendish fey known as the Nightmare King. Armand is an NPC antagonist from Critical Role’s third campaign. 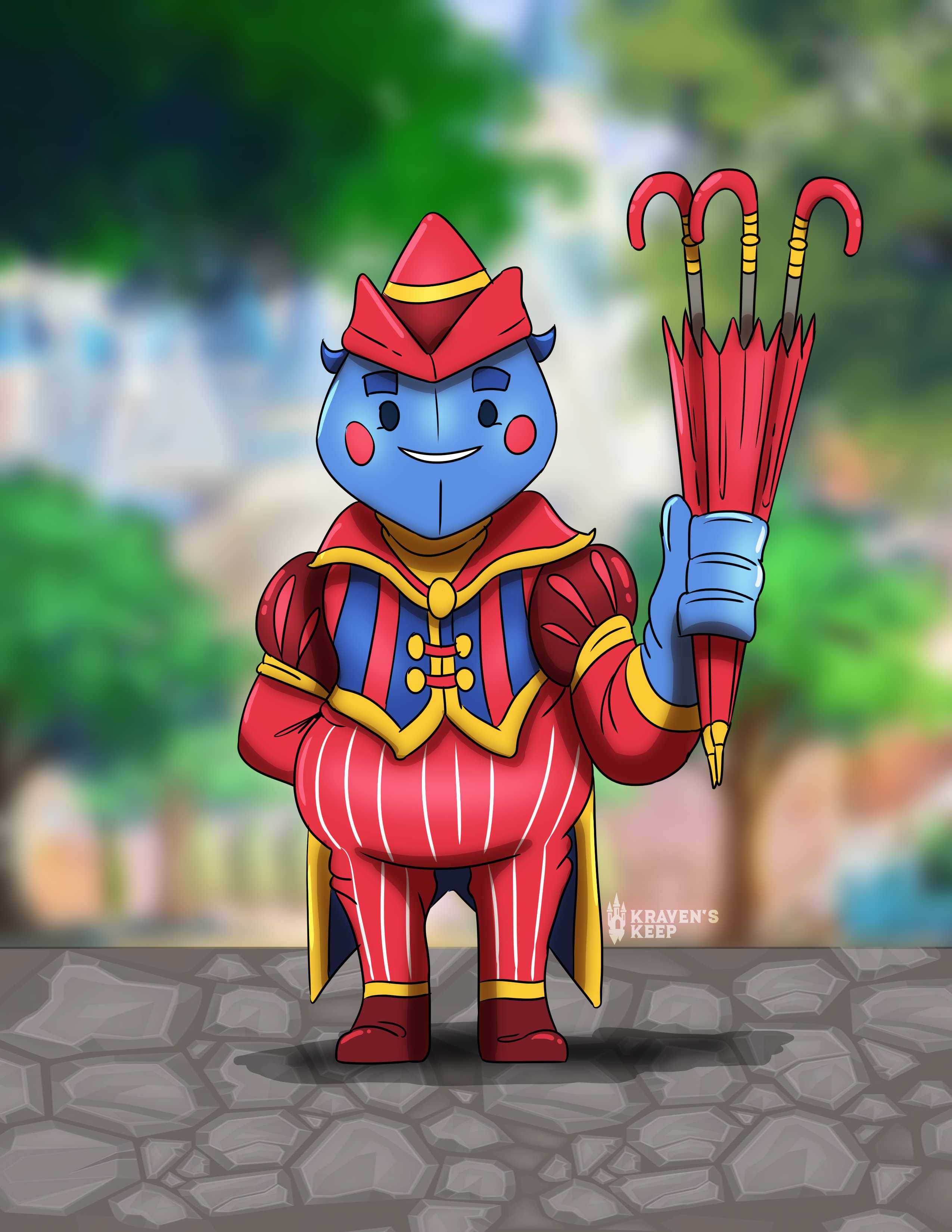 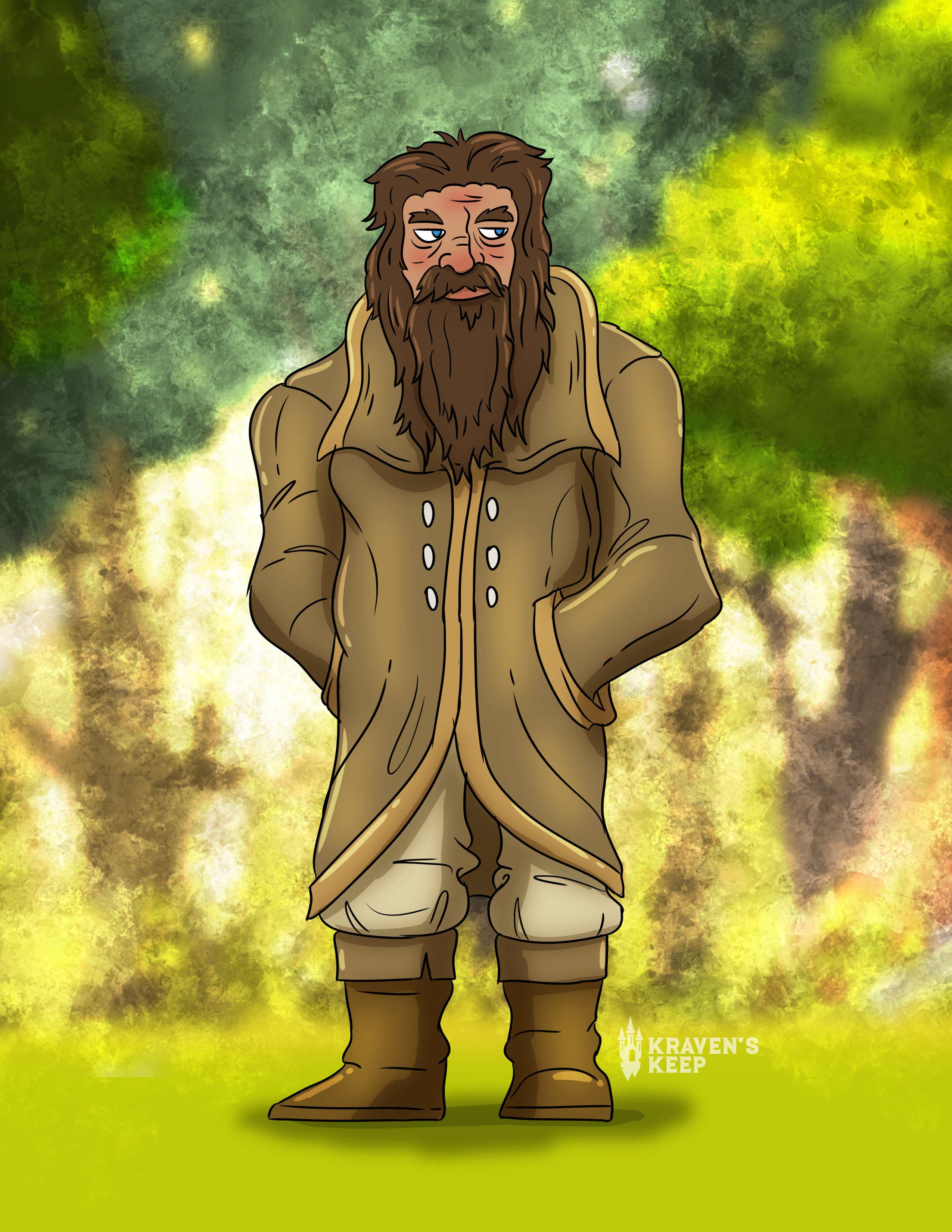 GURGE KISSGREG
Gurge is a human werewolf blood hunter that resides in the wilds outside of the city of Jrusar. Gurge is knowledgeable in the ways of controlling his lycanthropy and was briefly held captive by those who hoped to weaponize his curse. Gurge is an NPC from Critical Role’s third campaign. 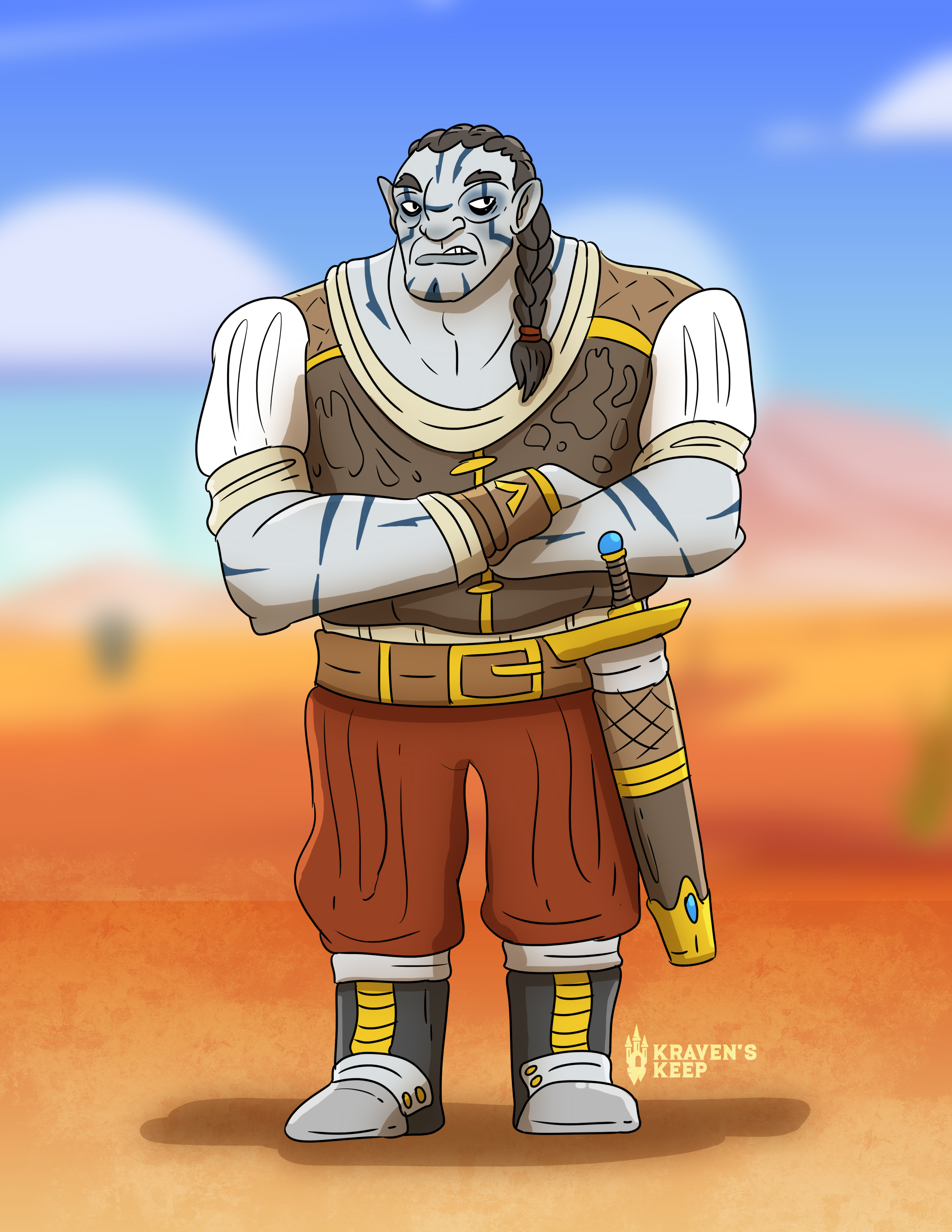 RATANISH
This large male goliath is the leader of Paragon's Call mercenary band based in the city of Bassuras. Ratanish is strong, imposing, and short-tempered: traits that have helped him climb the ranks of his gang. Ratanish is an NPC from Critical Role’s third campaign. 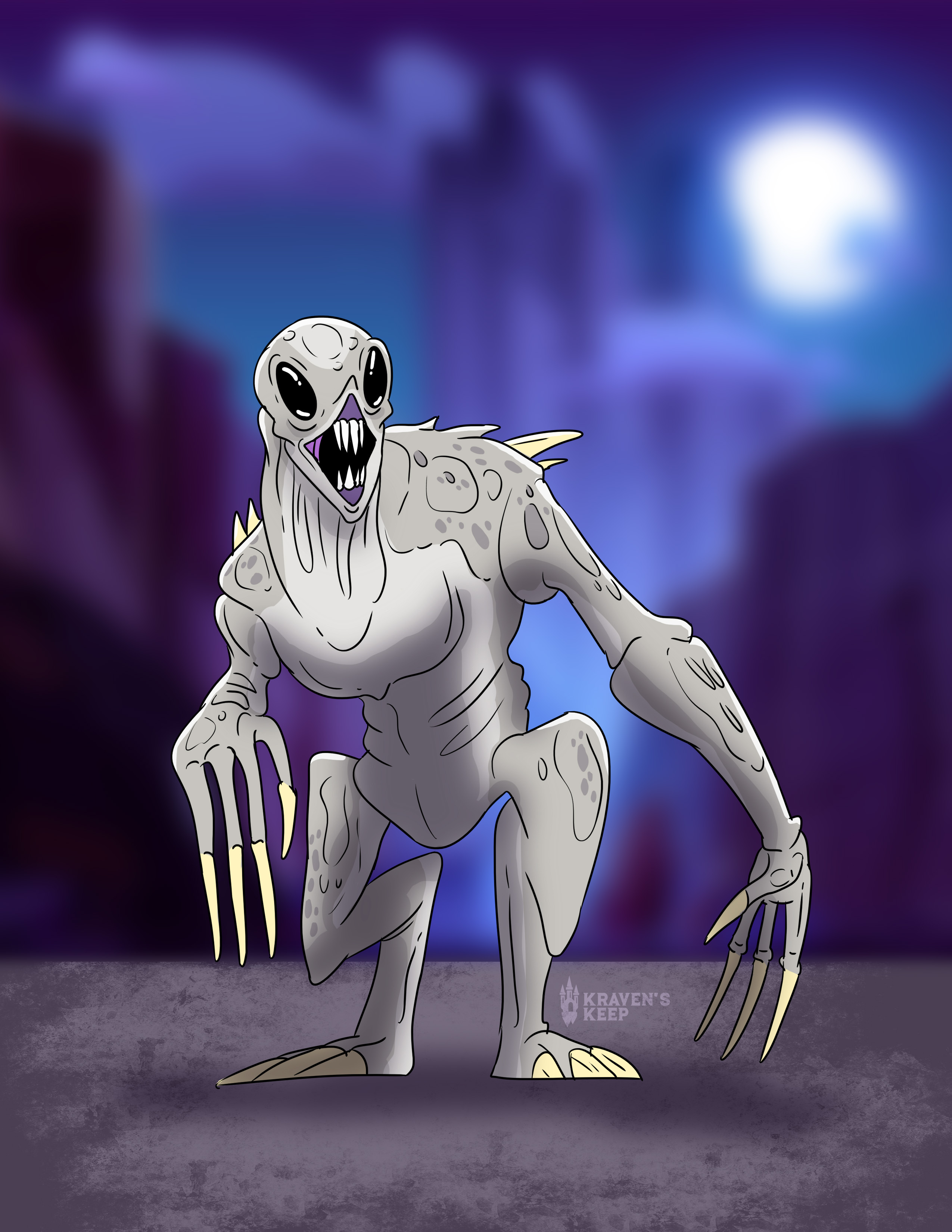 SHADE CREEPER
These small frightening creatures are rabid fighters, spawned and controlled by beings who become "blessed" by a creature known as the Shade Mother. Shade Creepers attack in large swarms that can easily overwhelm larger enemies. 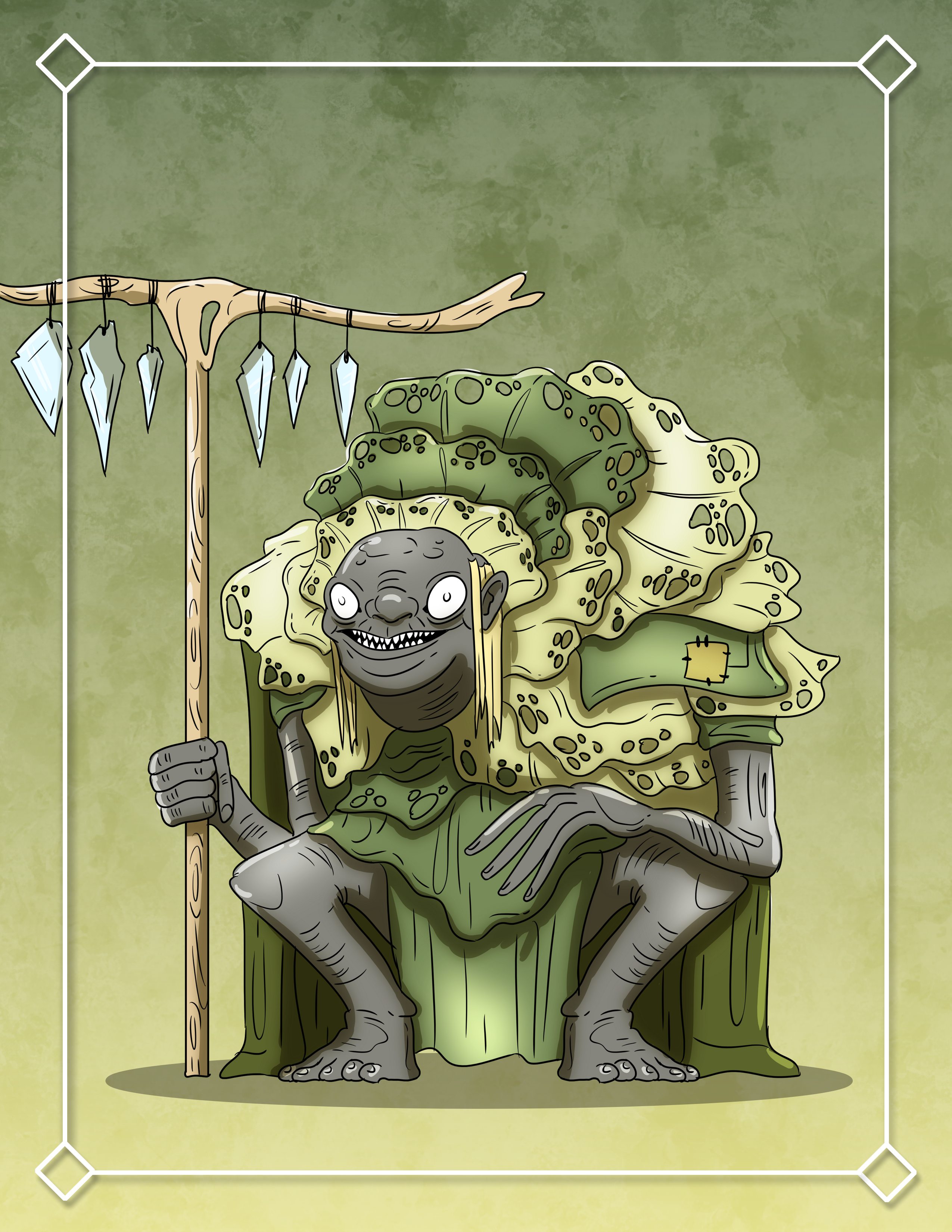 BAVLORNA BLIGHTSTRAW
Also known as Slack-Jawed Lorna, for the way her mouth tends to hang open, Bavlorna is the hag of the present. She is one of three hag sisters in the Hourglass Coven and relishes in deals made with desperate souls who look to relieve current and pressing problems. Bargains are always made for something Lorna had great use for. 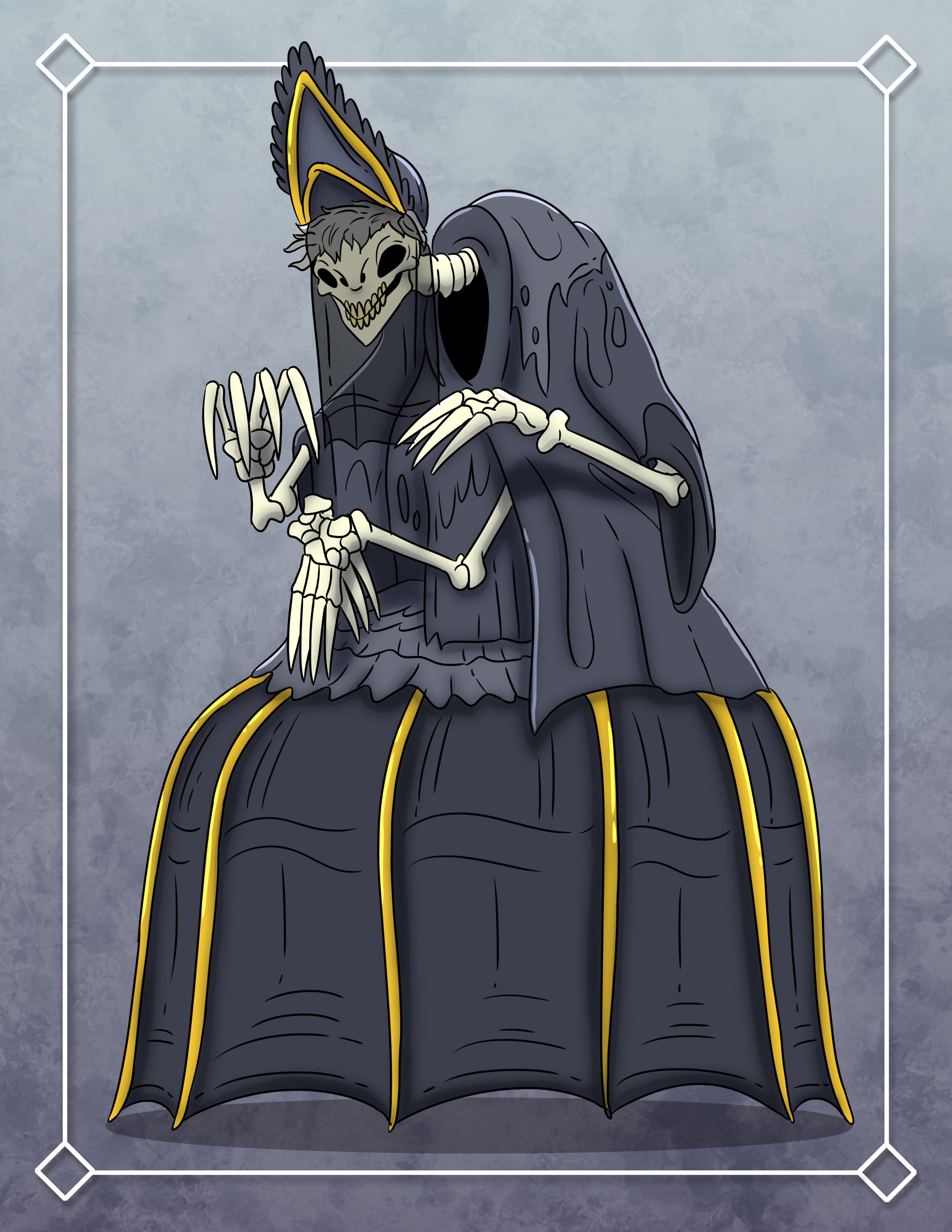 ENDELYN MOONGRAVE
Also known as Creeping Lyn or Bitter End, Endlynn is the hag of the future. People come to her to learn of their fates which Endelyn spells out in grotesque puppetry. She is one of three hag sisters of the Hourglass Coven and grants her divination powers for a portion of a being’s free will. She then uses her control over the person to lead them towards a horrible fate she has foretold. 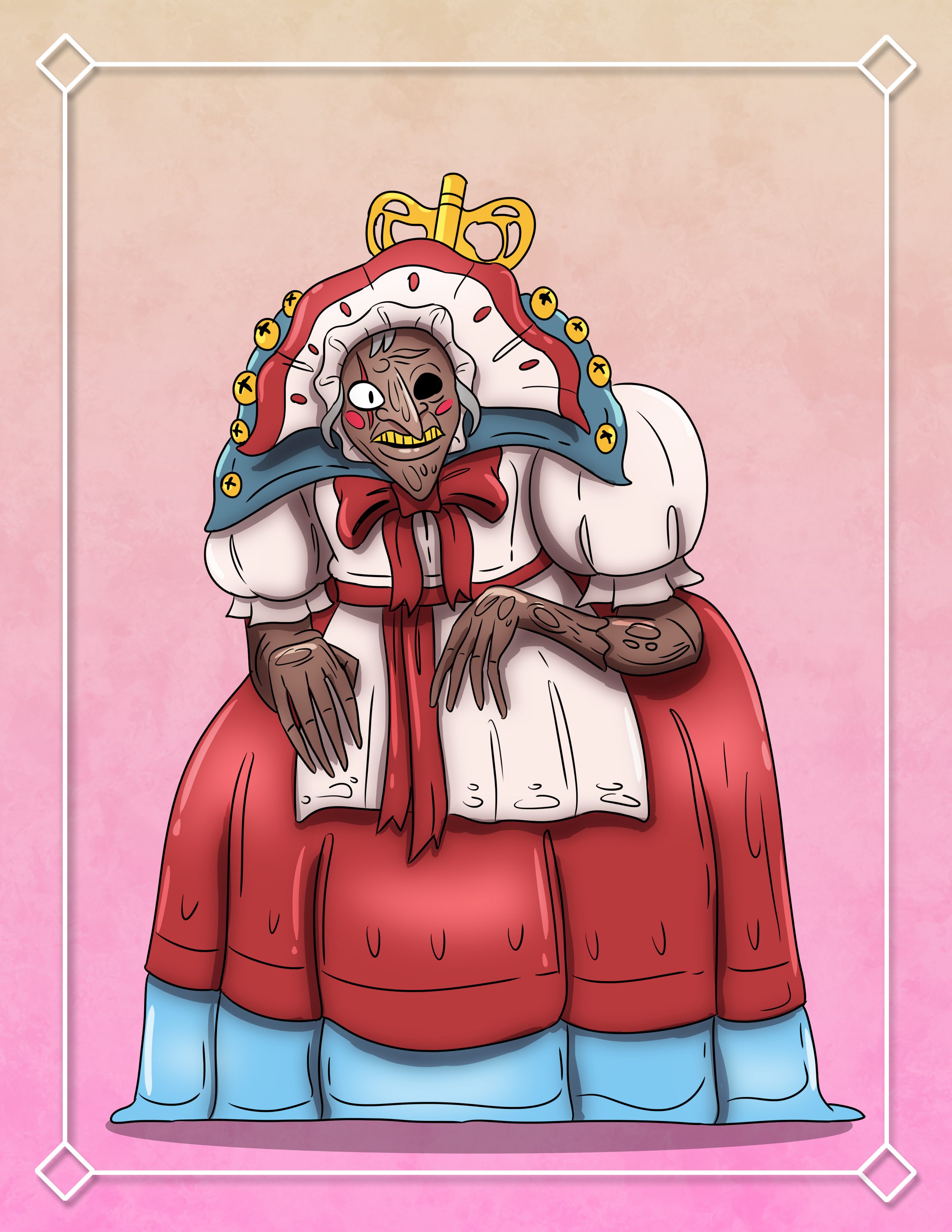 SKABATHA NIGHTSHADE
Also known as Granny Nightshade, Skabatha is the hag of the past. She is one of three hag sisters in the Hourglass Coven and is often sought out by people plagued with regret. She grants wishes to those who seek her but will often have a cruel twist on the terms in order to cause more suffering. Skabatha has assumed the guise of an old toymaker and is actually part toy herself, sporting a large windup key on her back. 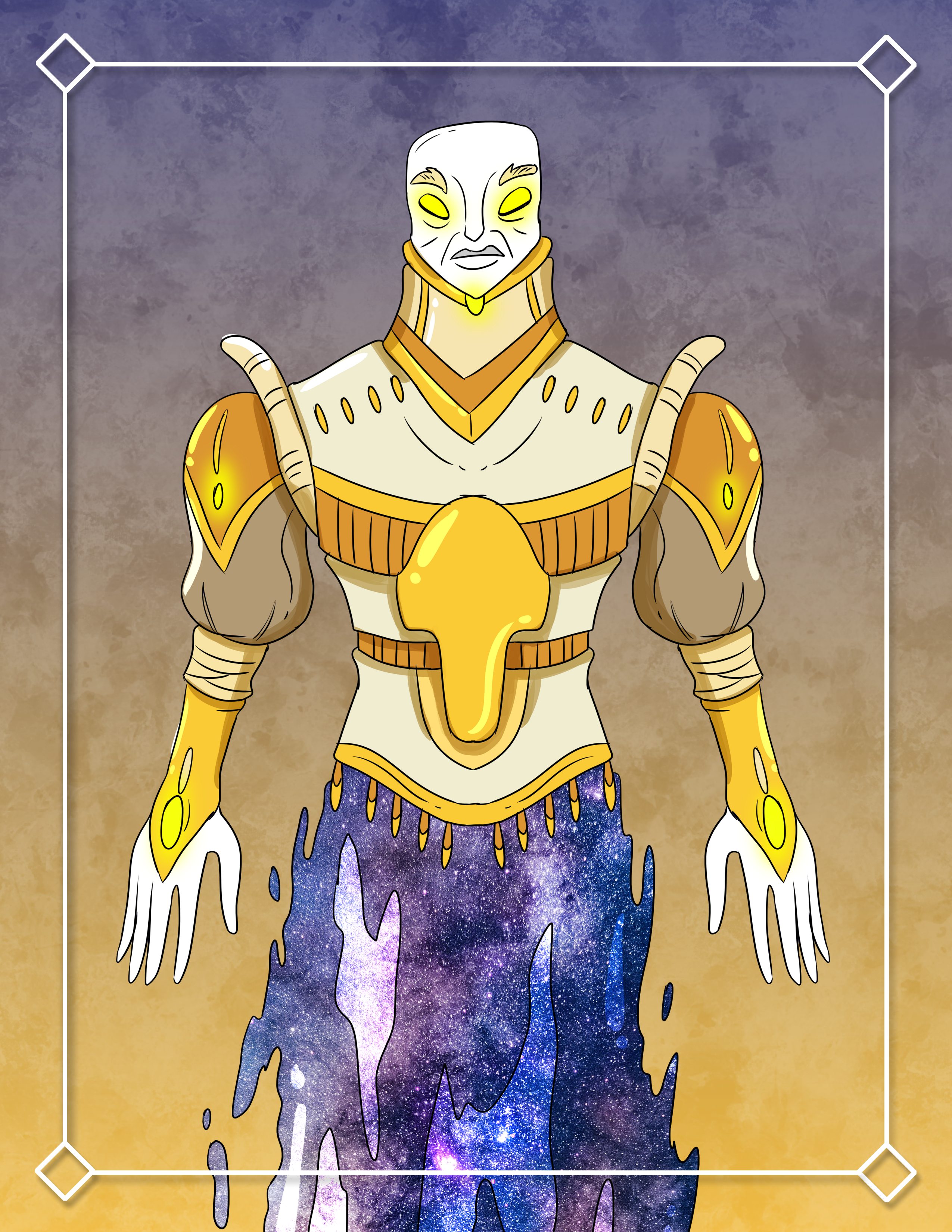 AO
Also known as the Hidden One, Ao is the overgod of the deities in the world of Abeir-Toril. He was largely unknown by mortals of Fareun until the Time of Troubles. This event occurred when two Demigods attempted to steal the Tablets of Fate from Ao, who then cast all the gods of the pantheon to the mortal realm in retribution. Ao often prefers to be distant from gods and mortals alike. He only intervenes when gods drift vastly from their known portfolios. 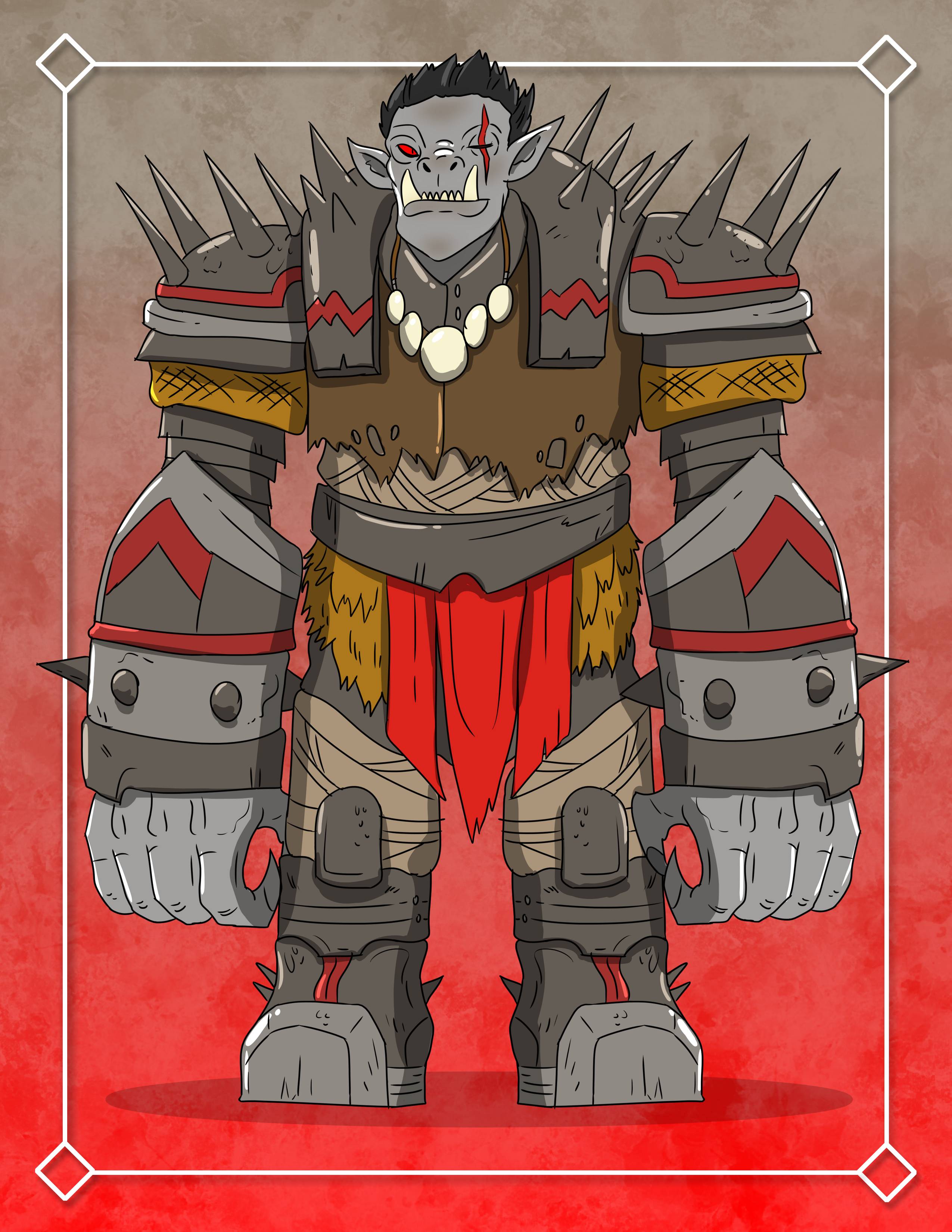 GRUUMSH
This one-eyed savage deity of orc kind demands brutality from his created followers. Also called He Who Never Sleeps, Gruumsh is believed to hold judgment over every orc, ordering them to wage an endless war against all other life. Gruumsh seeks retribution for the other god's mockery of him and their denial of his claim to the material plane at creation. Gruumsh will also grant sacred boons to champions who would tear out one of their eyes in his name. 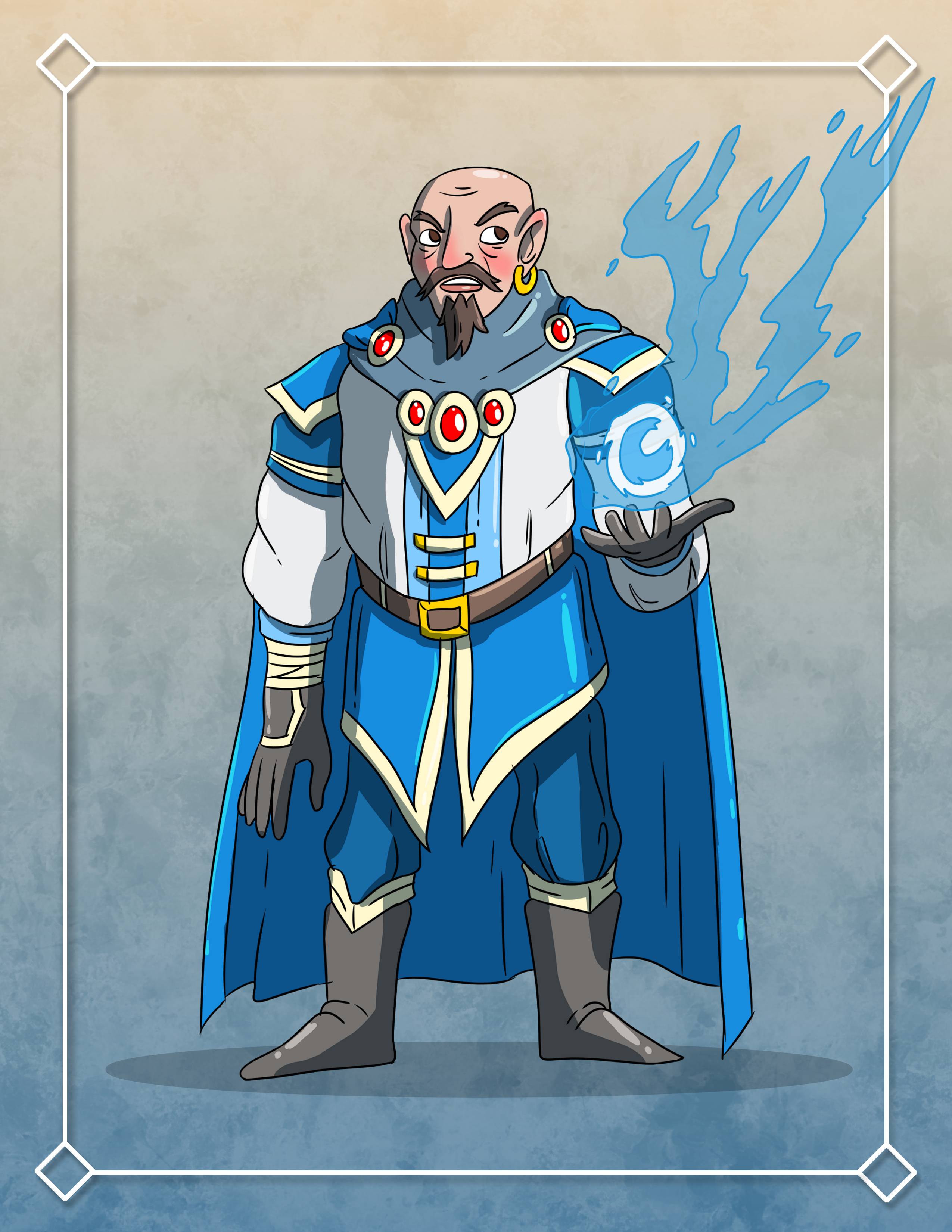 MORDENKAINEN
Creator of many useful spells Mordenkainen is a powerful archmage known across the multiverse. He was once the leader of the Circle of Eight: a group of renowned wizards known across the lands of Toril. Later on in his life, Mordenkainen suffered madness and defeat at the hands of the famed vampire Born Von Strahd of Barovia. Ages passed. As his mind eventually returned Mordenkainen came to inhabit the mystical Tower of Urm in which he travels the multiverse studying magic and keeping balance in the universe. 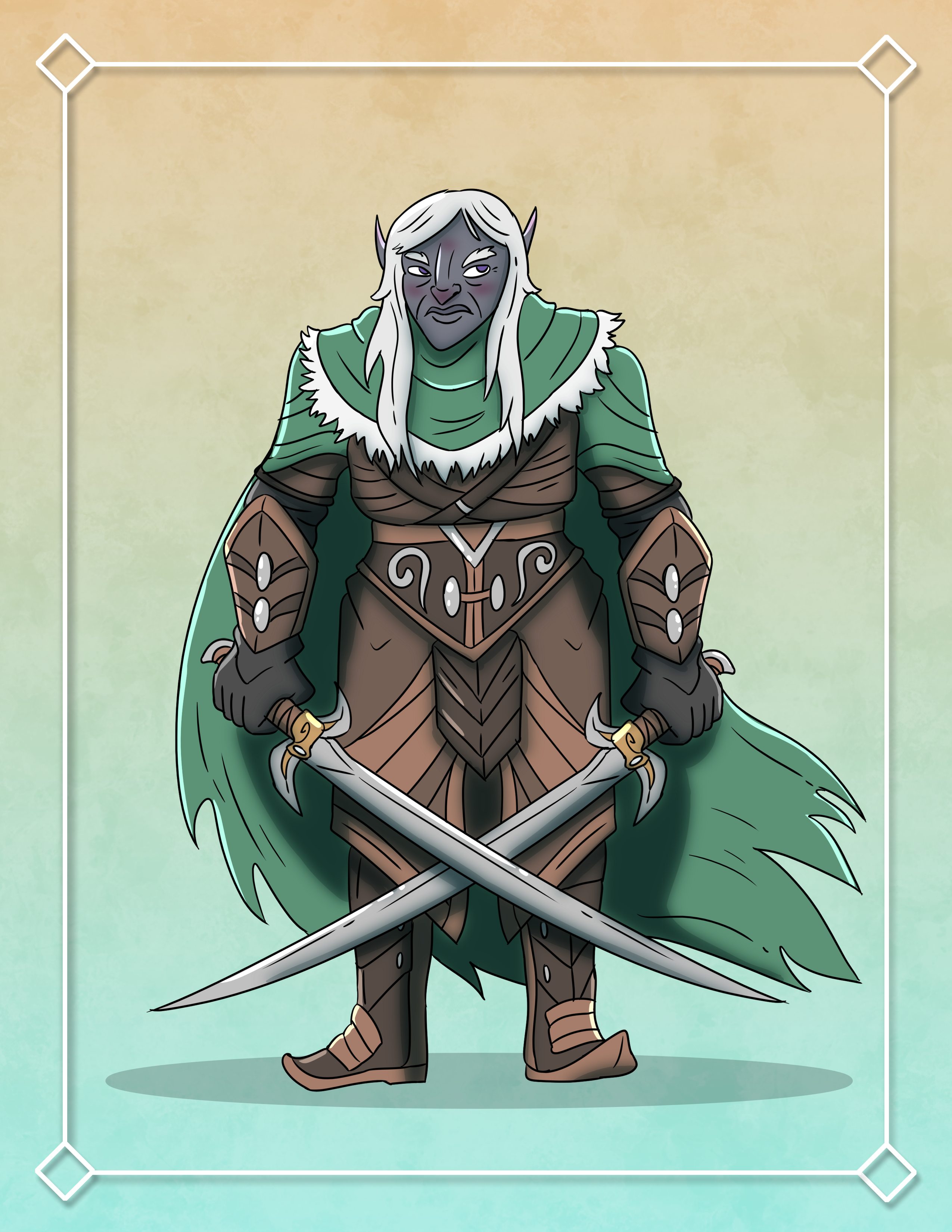 DRIZZT DO'URDEN
This unlikely drow hero is famed for abandoning his home and rejecting the evil ways of his kin in order to venture into the lands above the Underdark. Noble and kind, Drizzt respects all those who are good and just. He also possesses nearly unparalleled prowess in combat which he continually strives to perfect. 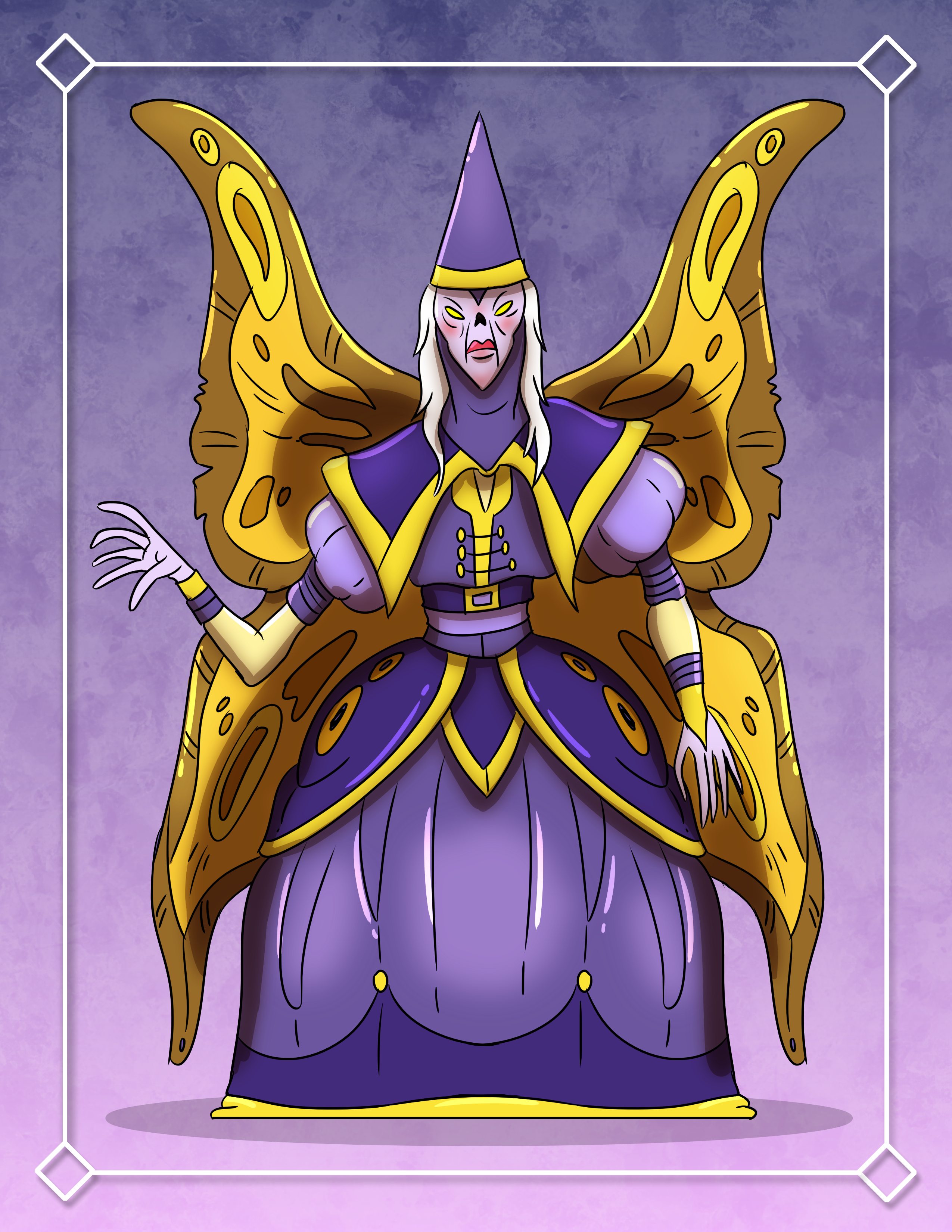 ARCTURIA
Arcturia is a lich and one of Halaster Blackcloak’s students, who are known collectively as the Seven. She is a master of Transmutation magic which she uses to create ghastly experiments on living beings. Not only does she transform others but she does so on her own form, most notably giving herself a large pair of insect wings. She is constantly changing things around her as she hates the idea of normalcy. 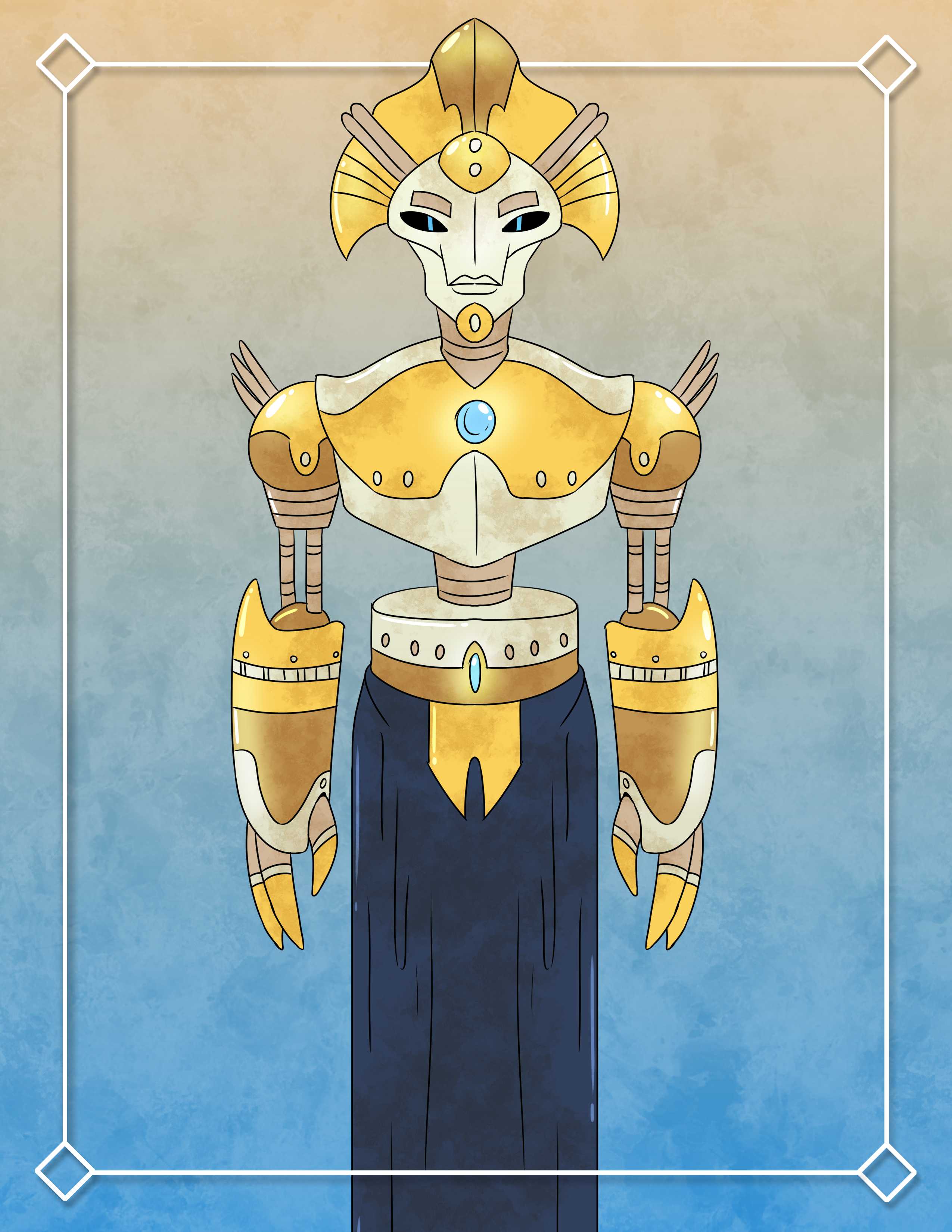 PRIMUS
Primus is the mysterious and powerful ruler of the neutral plane of law and order: Mechanus. Primus is also known as the creator of the construct race called modrons, who embark on the fabled and curious event: The Great Modron March every 289 across the outer planes of the multiverse. 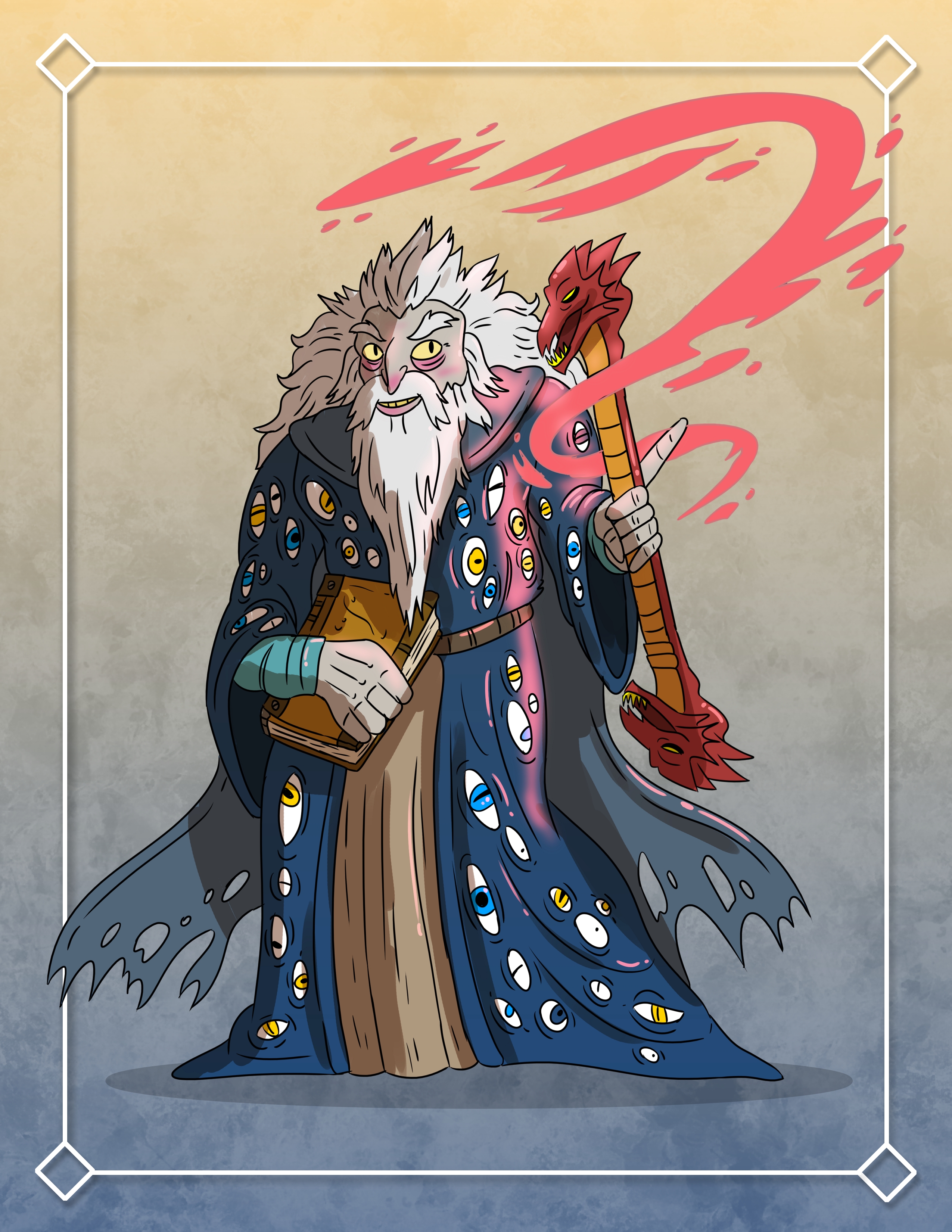 HALASTER BLACKCLOAK
Also known as the Mad Mage, Halaster is the true ruler and master of the vast dungeon network called the Undermountain. The Undermountain is located beaneath the city of Waterdeep and is filled with hoards of traps, deadly monsters, and treasures. Halaster has staved off his own demise many times by creating living clones of himself that can absorb his consciousness. 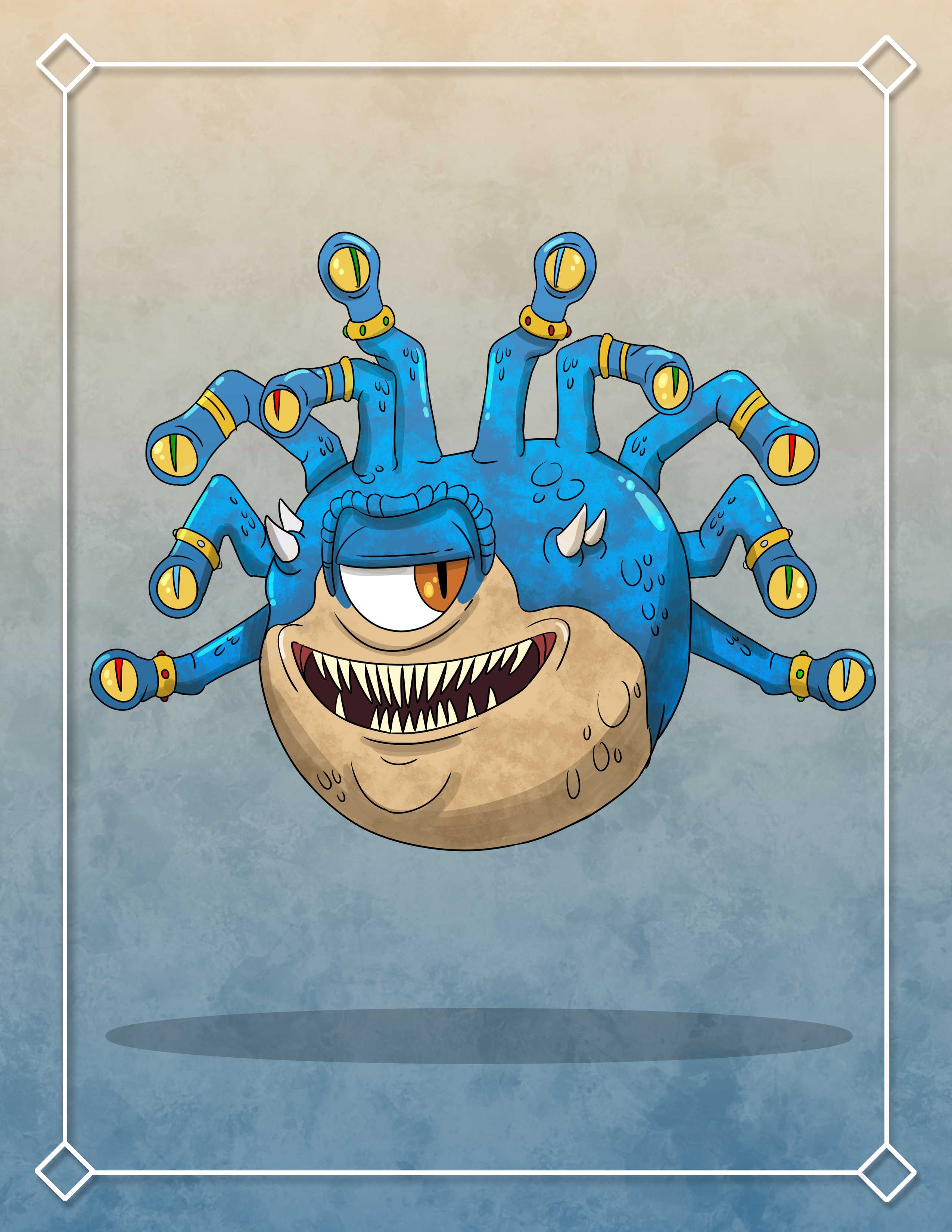 THE XANATHAR
This famed beholder crimelord and leader of the Xanathar guild operates in Skullport under the mighty city of Waterdeep. There have been many beholder “Xanathars” over the centuries, the coveted title changing owners after a leader is slain by a new ambtious beholder. The current Xanathar, formerly called Zushaxx, is known for its fierce paranoia and defensive affinity for its oversized goldfish named Sylgar. 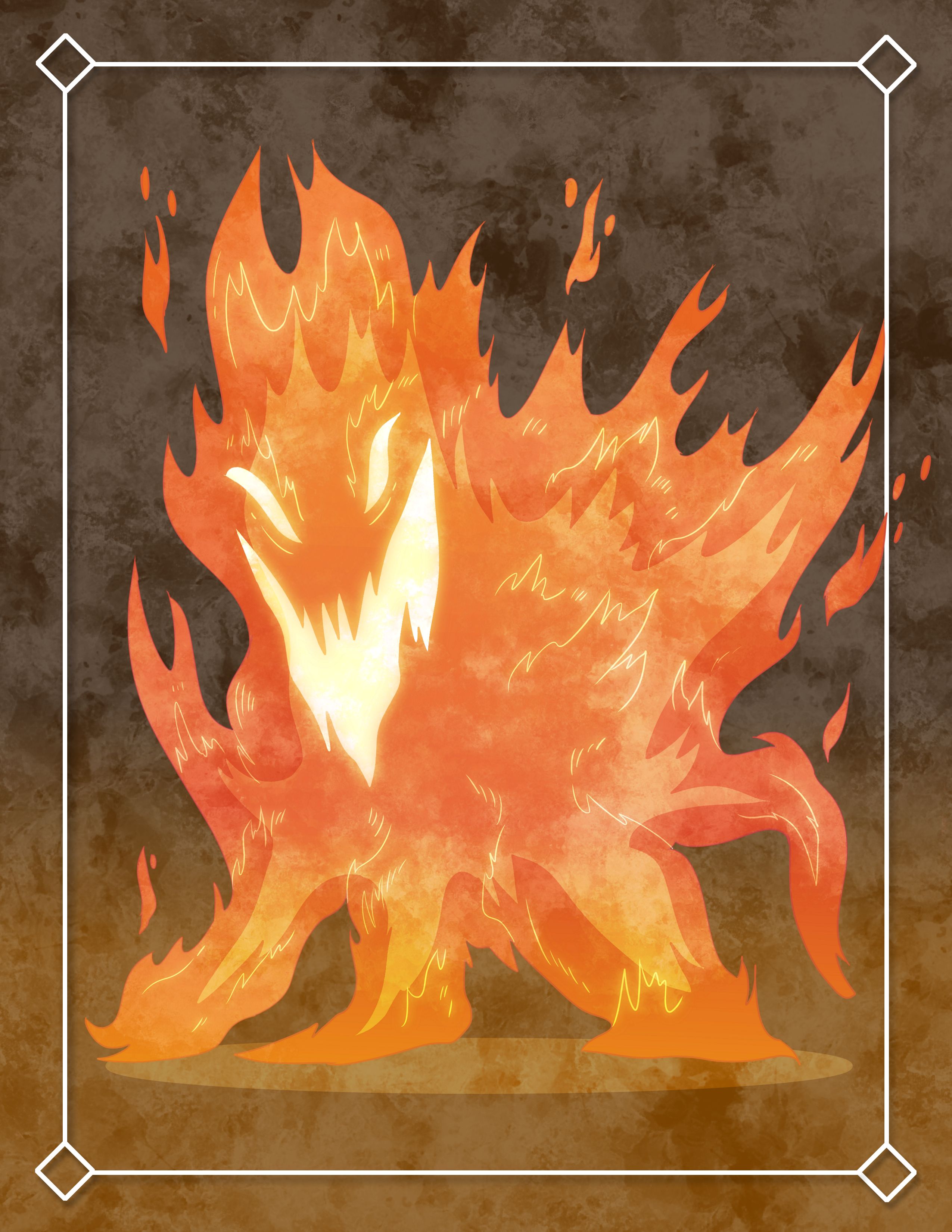 IMIX
Imix is an primordial who is also called the Prince of Elemental Evil, Fire Lord Imix, The All-Consuming Fire, The Eternal Flame and the Lord of Hellfire. He is the evil power of fire and a primordial creature older than the mortal world itself. He is angry, violent, vain, paranoid and prone to jealousy. He has an endless supply of energy, which he spends on schemes to free himself from bondage and burn the prime material plane. Imix also created a unique dagger Tinderstrike that is imbued with a portion of his power. 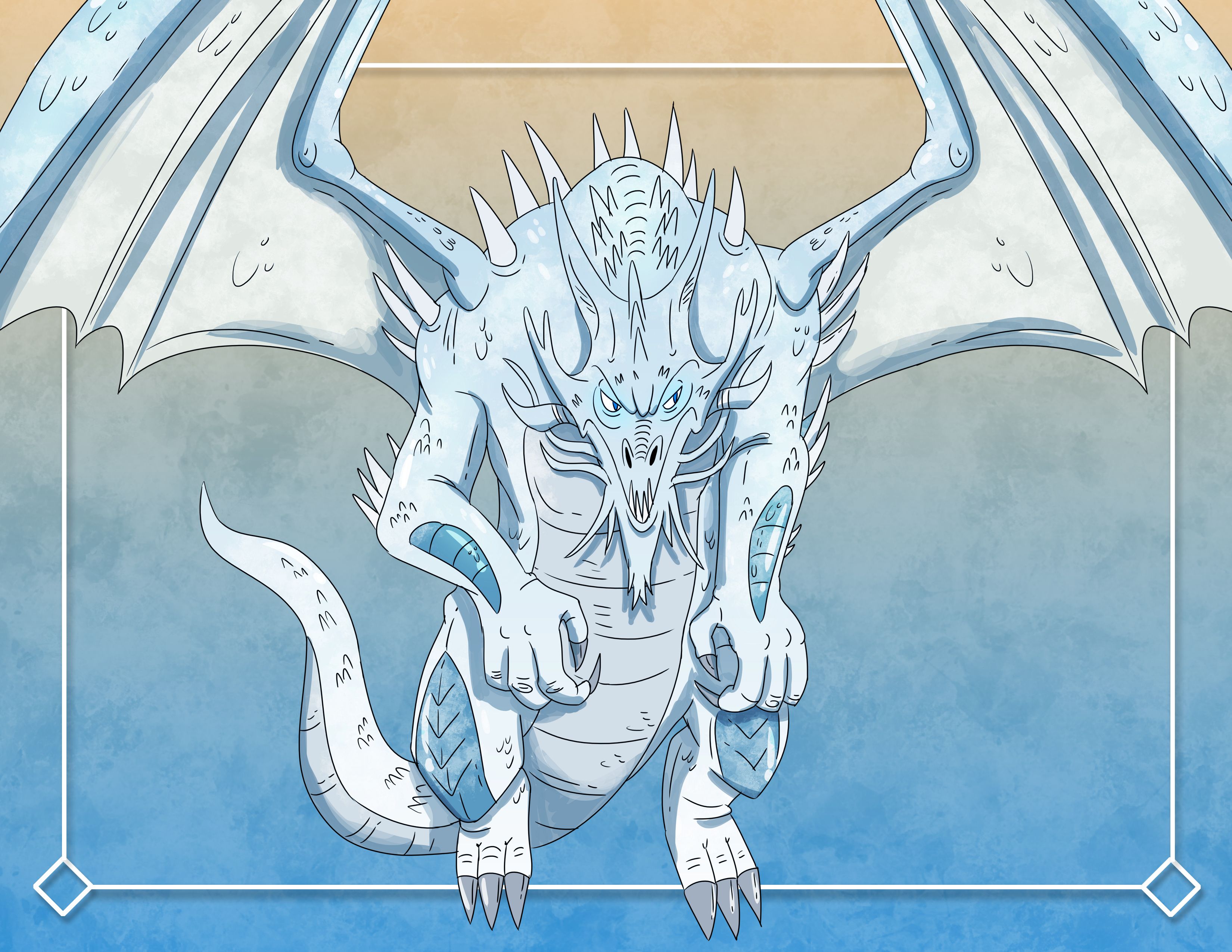 BAHAMUT
Deity of good metallic dragons, Bahamut represents wisdom and enlightened justice, which is justice tempered with mercy and punishment with forgiveness. Bahamut’s true form is that of a great platinum dragon, the only of its kind. He is also the eternal rival of his evil sister Tiamat, the tyrant queen of chromatic dragons. 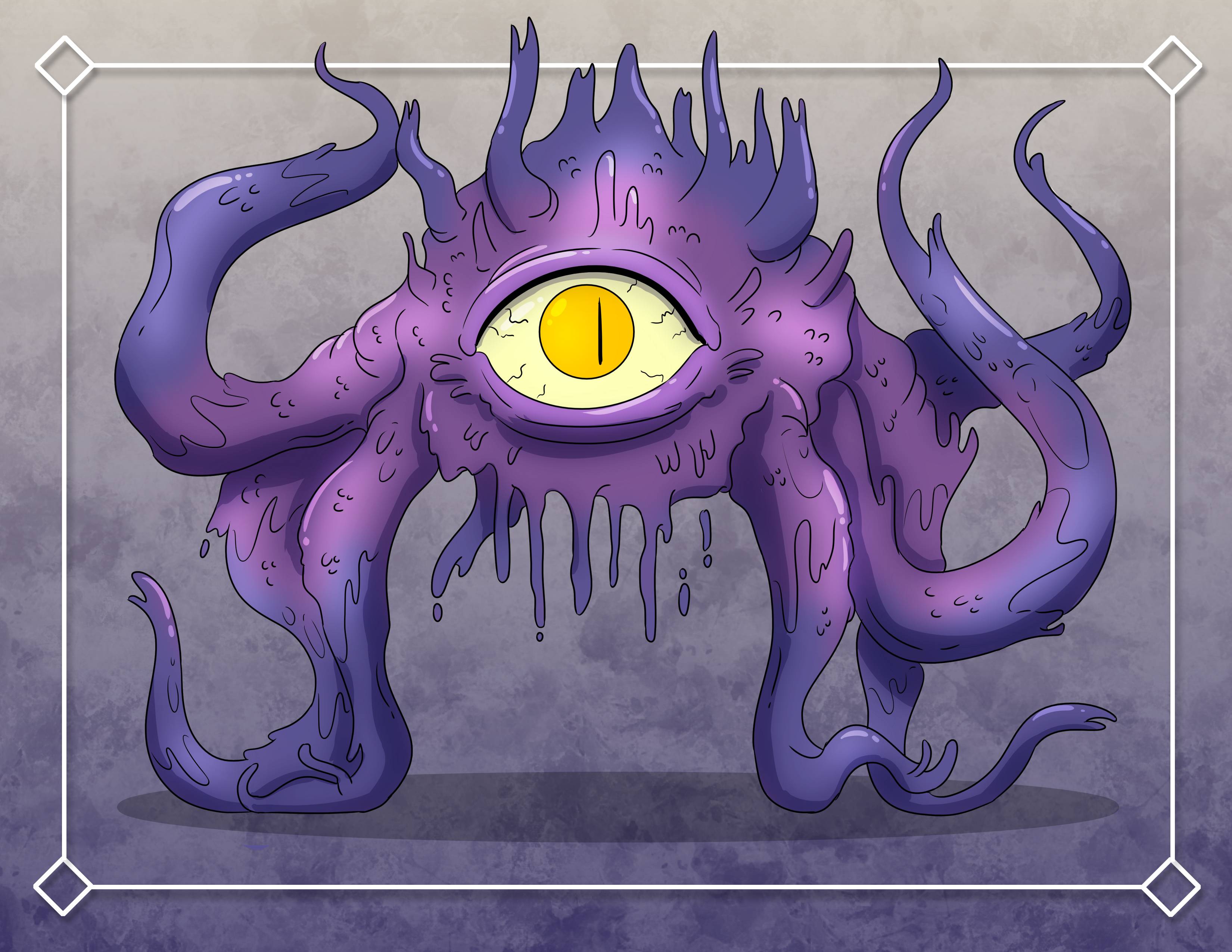 GHAUNADAUR
Also known as The Elder Eye and the Lord of Slime, Ghaunadaur is a dark, greater deity of abominations. He is a frightening entity worshiped by certain sects of deranged drow and is believed to have been touched by the far realms.